Things are winding down here, but there's still so much to be done and lots of food in the garden. Despite what appeared to be a heavy frost Monday night, most things survived, except the new beans that were coming along so well. But nothing ventured nothing gained. I was late getting them in the ground.
Tuesdays baskets contained carrots, sugar beets,  a stir fry blend (arugula, tatsoi, mustard greens, chard), sweet peppers, malabar spinach, leaf celery and likely something else I can't remember.
Last week when I send out a note asking folks if they wanted to try the mangels, I knew Monique would be a taker, bless her soul. And even more she wrote a blog post about her adventures in mangels. So if you took mangels as well, here are a few ideas for you. 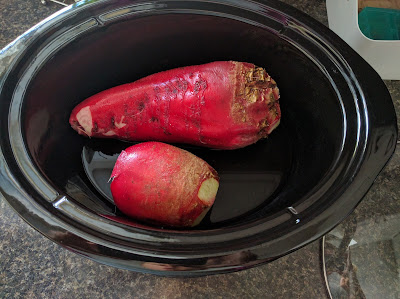 Mangels, not just food for cattle!
Long known as cattle food for farmers, mangels have been around since the 1800.  Mainly used to feed farm animals as it grows well and stores well.  But it is not just good for farmers, it is deliciously sweet and remains fairly tender even when large. Stores well if kept from freezing and you can eat the greens too!
Linda asked me last week if I wanted to bring some home and try some, so I said why not.  She told me it’s like a beet but not as strong as a red beet.  I tried to find the nutrition facts on mangals during my research but there wasn’t much available online because they say they are not that popular enough to eat.  But I did find out while researching mangels, that you can cook them and freeze them in a vacuumed sealed bag for up to 2 years or in a Ziploc bag for 6-8 months.
So I thought what can I make with these mangels? 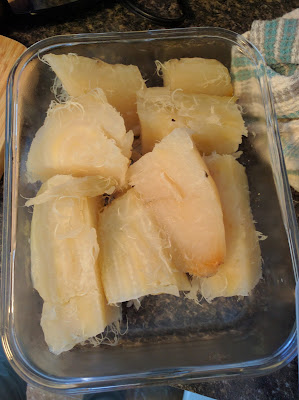 I love using my slow cooker because you can put anything in it to cook and walk away.  So I did some research and found that lots of people cooked their beets in the slow cooker with foil but I am not a huge fan of using foil so I decided I was going to try without.  I put two cups of water in the bottom of my slow cooker with some salt, cleaned the mangels really good to remove all the dirt and cut the tops and bottom off.  I placed two mangels in the slow cooker because that’s all I could fit, set it for 4 hours on high and then left to run errands.  When I returned they were done and ready.  I let them cool a bit so I could handle them while I removed the skin, which was super easy, then I let them cool completely to room temperature.  I decided to make a mangel hummus with some of them and I froze my hummus in small containers so I can use later.  I still had a lot of mangel left so I searched on pinterest and found a chocolate beet cake recipe and substituted the beets for mangels, it was moist and super delicious.
I hope you enjoy the mangel hummus and find other great ways to cook and eat mangels.
Enjoy! 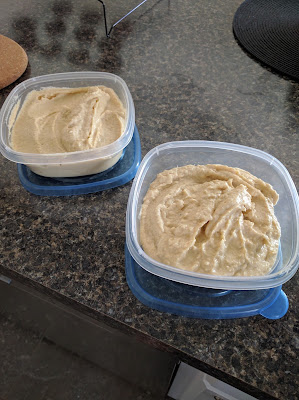 Place mangels and chick peas in food processor and pulse to combine. Add in the rest of the ingredients and process the mixture for a full 2-3 minutes or until the hummus is super creamy, stopping to scrape down the side of the bowl.  Serve with veggies!
Posted by Linda at Wednesday, October 12, 2016 No comments: 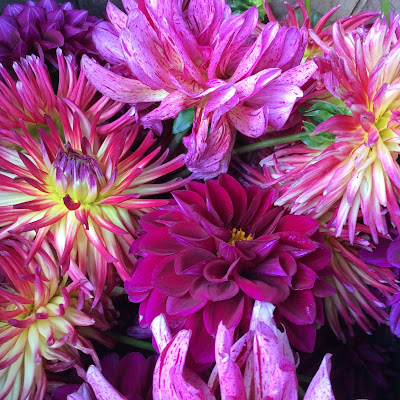 The night temperatures are dipping and things are changing around here, and probably are where you are too.
It rained as well and that was the biggest change of all.
The fall crops I put in popped up and I was able to harvest lots of arugula today from a reasonably small patch, with another patch due to catch up soon.
The mustard greens, chinese greens and radishes I seeded look good, as do the turnips. It is amazing what a bit of rain will do. 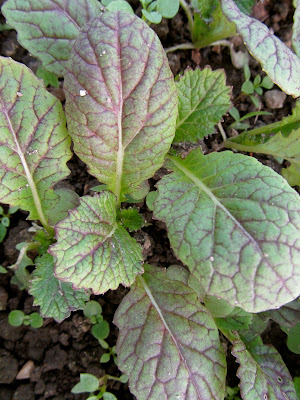 As I dug the soil to retrieve the jerusalem artichokes I was surprised though at how dry the soil was underneath. We've got a lot of catching up to do after such a dry spring/summer and lack of snow last winter. 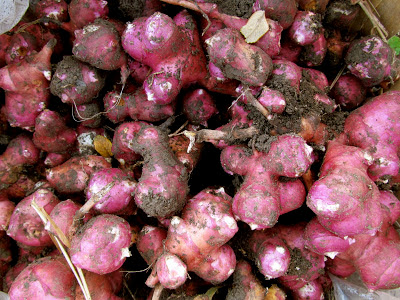 I'm not complaining though, it has been a pretty good season and like most, there have been some things that have done very well, and some things that did not. I'll take a dry season over a wet one anytime.
One thing that has worried me in the garden this year is the appearance of stink bugs . This isn't the first year I have noted them in the garden, but it is the first year I saw them in such numbers and saw the damage they can do. They were tough on the tomatoes, and I lost lots of early fruit to them, as they inject an enzyme into the fruit which liquifies it enabling them to slurp it out. Tomatoes with stink bug damage have obvious mottling and are not saleable or edible. Good thing I planted lots of plants. Buggers. I'll be notifying the Ministry of my trials with them this year as they continue their deadly march northward into Canada, following on the trail of ticks.
From what I can understand they are difficult to stop. Be aware that they like to overwinter in homes, so you may spot them in your home. I know if I see them in here I will not be kind and I'll also be mulling over my strategy to deal with them next year in the garden. 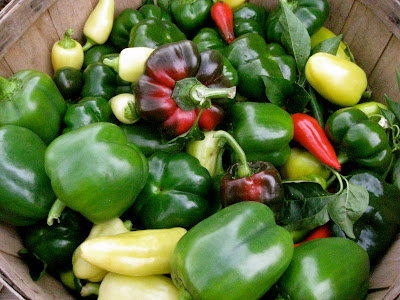 This weeks baskets were pretty full. The lumpy bumpy jerusalem artichokes (sun chokes) made their first appearance for my Tuesday folks. Tomatillos, sweet potatoes, tomatoes, sweet and hot peppers, arugula, kale/broccoli shoots, curled parsley, leaf celery, garlic, a few dahlias to cheer you up and possibly something else I have forgotten I added. 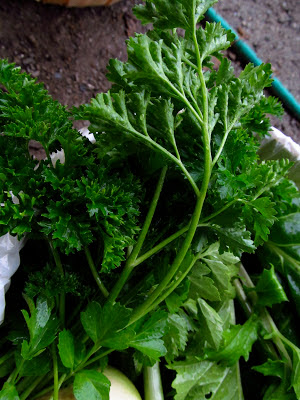 Some of you asked for and received mangels and a whole whack of herbs for drying for the winter. The herbs are pleased with the weather right now and doing well.
What to do with the jerusalem artichokes which, incidentally are neither from Jerusalem or in the artichoke family? I tell people to use them as they would potatoes. Roast them, mash them, saute them or of course make a delicious soup with them.
A wonderful recipe for Sunchoke and Garlic soup can be found here.
If you read the preamble to the recipe, you will be made aware that jerusalem artichokes can cause gas, so be aware of that as you begin your adventure with them. Eating them prior to a first date with someone is not advisable.
Enjoy!
Posted by Linda at Tuesday, October 04, 2016 No comments:

Connect with Tree and Twig

Linda
Wellandport, ON, Canada
I have a BSW degree, and worked as a social worker for quite a few years, before getting out (with most of my sanity intact) to farm.I grew up on a farm and this is what i was meant to do. I have two wonderful daughters, as well as 3 dogs, 6 cats, a pig named Joey, chickens, ducks and a bunny. All are family.