Garden workshop March 24th...are you in? 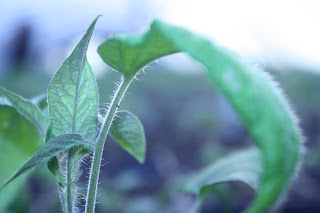 Planting time is coming.
Over the past few weeks, I've pulled out some fading crops from the hoop houses, and seeded some spring crops.
It has been a confusing time for plants and growers alike.
With a mild and reasonably snowless winter, plants have sent up seed stalks early and I've been sunbathing in my bikini.
Okay-I'm not that confused.
But in January and February newly seeded areas sprouted quickly and grew quickly as well. It's nice to have new crops ready to harvest in...February? Wow.
The planting time that is coming is the one that happens at the same time every year.
Cool weather crops like onions, leeks, brassicas, lettuces and other greens can be seeded indoors now and over the next few weeks, in preparation for cool spring soil outside.
Then, by mid-March to early April, it is time to plant some summer jewels.
I tend to do my big crops beginning around this time frame, with eggplants and hot peppers hitting the soil-less mix first, then sweet peppers, then tomatoes. Weeks and weeks of tomato seeding. 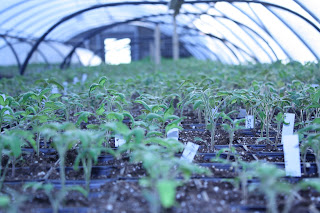 Over the years I've had lots and lots of people ask me questions about  seed starting, vegetable gardening, seed saving techniques and questions about preferred varieties.
I don't ever claim to know it all, and think people who believe they know it all are cheating themselves.
Like every other thing in life, there is so much to learn about gardening. Why stop learning?

But if you would like a little guidance or are new to gardening altogether, I am holding a gardening workshop here at the farm on March 24 and am calling it "Sowing seeds for 2012"


Saturday, March 24 – Gardening workshop: "Sowing seeds for 2012." We'll plant seeds, plan gardens and I'll dispense what I hope will be useful gardening advice. It's time to get started now! Cost $40, which includes your choice of 10 packs of seeds, soil, pots and coffee. 2-4 p.m. Please pre-register. Call 905-386-7388 or email treeandtwig@sympatico.ca.

This session will be very much hands on.
I suggest, as opposed to wearing your bikini, you wear your gardening clothes and rubber boots.
We'll each have a planting station in one of my hoop houses and will be talking and seeding our plants together after a little informal talk that considers some of the basics.
It is not unreasonable to think that you will be able to get all your garden transplants seeded this day. That is, of course, as long as your garden isn't as large as mine..
You'll have access to some of my very special seed that I don't sell, or that is sold out at this time.
Bring your gardening questions, seed that you would like to sow if you have some already
and most importantly bring a box or tray to take home your newly seeded goodies.

It'll be fun and good for the soul. 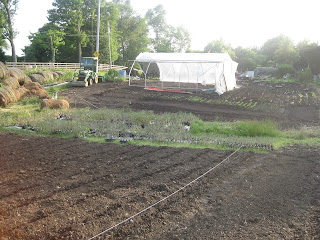 2012 Seedy Saturday-the results are in!

Ha again!
This time it is not directed at Galen Weston but the weather.
Hard to believe that this winter, the winter of little snow and mild temperatures, that it chose to snow on Seedy Saturday.
Lots of snow. Lousy driving snow. Shovel the driveway snow.
And "perhaps we shouldn't go out snow."

What can one do though?
That is the reality of farmers and gardeners the world over. The weather just doesn't always cooperate.

Thank-you to everyone who did come out. There were lots of you!
I was actually pretty surprised at the turnout considering the poor weather. Hundreds braved it to listen to some fabulous speakers, share their seeds with unparalleled generosity and speak to the vendors and purchase their goods.

Some things didn't turn out the way they were supposed to.
The difficulty with being an individual planning this sort of event is that in order to secure a venue, some control over the event ends up being traded off.
There were some last minute issues because of poor communication, regretfully.
The speeches got off to a late start, the food and coffee that were supposed to be there..weren't really.
There was a night-before vendor cancellation.
Omar, the fill-in for another Brock student is a true gem. He whipped up a few apparently very tasty dishes to serve, but alas, not enough. Omar-you are wonderful. It was so great to meet you.

I'm unsure of the final tally for Start Me Up Niagara, but thanks to all for your generous donations at the door. $265 was raised, this being enough to cover one weekend of expenses for the lunches that are served at the centre. More was raised at the children's activity table. The activities were really cool- lots of non-kid types got in on the fun.

I still have lots of t-shirts left if anyone wishes to buy one to support Brock's "Dig It" OPIRG group and their goal of establishing community gardens. If you couldn't make it but would like a nice light t-shirt for your summer gardening activities, please get in touch.

The seeds people brought for the seed exchange table were so great! I still have lots in my possession that were left at the end of the day. I'll keep giving them away. These are some of my favourites which incidentally I'm so excited to keep and plant this year...


Many thanks to Paul Federici for the fabulous music, from one former social worker following her dream to another following his.
Steven Biggs, Mark Picone and Katrina Simmons for your knowledgeable and enlightening talks, I sincerely thank you. Many people commented that the talks were the best ever...and they stayed to hear them all.
And special thanks to my friends who helped pull it all off. I know you shudder when I call and say I have an idea. "What are we getting into now?", you must wonder. Thank you for trying to keep things running smoothly, for giving up your day for this vision of seed sharing and for your love and support.
We did it!
If people are interested in being involved in a committee to organize next years event, please let me know by email. It's become a bit too much for me to organize on my own and I'd love like-minded people to help make it much, much better.
Thanks to all for supporting Niagara Seedy Saturday!


It's been an interesting week. When I've been packing seed for Seedy Saturday, picking greens or just being a mom and housefrau, I've been thinking.
Galen Weston, I'll consider you here.
Read about the really dumb comment the executive chairman of Loblaws made here while speaking at the Canadian Food Summit.
When you are in charge of a 9 billion dollar business, you should be a little more on the ball than to comment about the health risks farmers markets pose, and I quote ".. one day they're going to kill some people though."

Oops. Scramble, scramble. He didn't really mean it, he was misunderstood.
Friend of the farmer, strolling through the field with the salt of the earth, partners. Oops.
That image of you is gone now and forever, Galen Weston.
I mean that is for those of us whoever believed your marketing in the first place. But it sure as hell wipes out that advertising campaign, doesn't it?
Such funny and amusing stuff.
A follow-up article in the Toronto Star mentions people who got food poisoning while tasting samples at your store. How ironic. How terrible.
How many products have been recalled over the years in your stores?  How many people do you fill with edible oil products, trans fat, pop, GM products, BPA lined cans and pesticide laden produce?
It could actually be that this time around bad press isn't actually better than no press at all.
It appears to me that the joke is on you.
As was the thought of actually attending the Canadian Food Summit.
It did cost between $500 and $1000 for the two day summit in Toronto. Accommodation would be extra.
I thought I would like to go, and asked about a reduced fee for a small farmer. Umm -"no" was the answer.
Via social media I implored Galen Weston to sponsor me.
No response from him. I didn't actually expect one.
The message here?
Sorry small farmers. We're going to talk about FOOD. But without you and your input.
Then of course Galen's message to attendees that farmers are endangering the health of those to whom they sell directly.
How positively wonderful it all must have been.
Perhaps Galen you think you know food better than those of us who produce it.  I don't think so, but I realize to you I am nobody.
I also think perhaps your business savvy isn't as spot- on as it could be.
Even farmers know about putting our foot in our mouths and how it can be bad for business to slander other business folks. You know... like the farmers you slandered.
Come on down Galen Weston. I may not own a 9 billion dollar business, but I don't have hundreds of people bad mouthing me right now. Maybe you and I could chat and talk about business.
For a price.

The wacky weather continues!
I've been pulling out the winter crops from the hoop houses the last few days and planting for the spring.
The winter crops have pretty much figured out that this MUST be spring, and are sending up seed stalks. Can't blame them....feels like spring to me too.
Here are some sights seen on this fine early February day-

Connect with Tree and Twig

Linda
Wellandport, ON, Canada
I have a BSW degree, and worked as a social worker for quite a few years, before getting out (with most of my sanity intact) to farm.I grew up on a farm and this is what i was meant to do. I have two wonderful daughters, as well as 3 dogs, 6 cats, a pig named Joey, chickens, ducks and a bunny. All are family.